Just in case anyone wants some clarification on some of the points in the previous post that might be a little off (probably more my fault for throwing out far too much information for one day than anything else!):

The ear bones are called "otoliths" and are very useful in determining the age of fishes, particularly in temperate waters; in tropical waters they are often less useful - but the analogy to rings in a tree trunk is pretty apt! Some fishes also deposit growth rings on their scales, but these are generally less reliable. Fishes that live in waters where the temperature varies little throughout the year (like the tropics!) have much less pronounced "rings" on their otoliths that those that live in regions with marked seasonal temperature changes, so interpreting tropical otoliths is much more challenging. Using the right techniques, you can sometimes even see how many days a fish has been alive for. It's important to verify this ageing method; scientists who want to verify the accuracy of this ageing technique in a particular species will often tag a (living) fish for later identification and inject the fish with an antibiotic called tetracycline, which permanently stains the otolith in a ring on the day it is injected. The fish is then released, and when it is recaptured, the otolith is examined under UV light, which causes a prominent glow in the stained ring on the otolith and allows you to verify how regularly bands are deposited.

With regards to the bioluminescent bacteria in anglerfishes, the anglerfish supply nutrients to the symbiotic bacteria that live in their "lures", and the bacteria use this to grow, reproduce and - of course - produce light. The luminescent chemicals are all contained within the bacteria; they are similar to the luciferin and luciferase system you may be familiar with from fireflies (and those "snap" glow sticks).
Many dinoflagellate algae produce bioluminescence too - not to attract prey as in the anglerfishes, but instead to attract predators to eat would-be dinoflagellate predators, or perhaps to confuse potential dinoflagellate predators with a burst of light.

Chlorophyll a is one of the most important photosynthetic pigments in plants. In a device called a "fluorometer", commonly attached to a CTD, pulses of UV light excite chlorophyll a in marine algae within the water column; during the time the light is off, a sensor measures the amount of red light given off by the chlorophyll as it returns from its "excited" state to its "resting" state. This gives a measure of the amount of chlorophyll a in the water, and a measure for the productivity of that water (how much plant matter - and therefore food - is available to the ecosystem in that area). You can find some simple experiments (and pictures) with extracting chlorophyll and seeing this effect at this link. Keep the mixtures as cold as you can, and in the dark if you're not using them, as the chlorophyll quickly degrades otherwise. If you don't have a centrifuge (who does at home!?) you can pour the mashed up residue through a filter paper (a paper coffee filter works nicely). A little bit of sand helps to macerate the tissue when you're grinding it up.

Our young researcher slightly exaggerated the numbers of fish species in the sea; the Census of Marine Life estimates that there may be as many as 20,000 species of marine fishes (over 15,000 are currently described), and around 160 species of fish are described (identified and given a scientific ["latin"] name) every year. Including freshwater fish species, there are well over 30,000 species in the world.

The deepest part of the ocean is Challenger Deep in the Marianas Trench, which is around 11,000m deep; on average, the oceans are about 2,000m deep. Humans have been to the bottom once, in 1960 in a vessel called the Trieste. No manned vehicle currently exists that can make it to that depth safely. The highest mountain on earth, Everest, is currently measured at 8,848m above sea level. 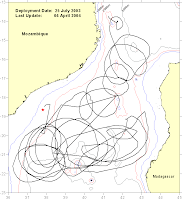 He's quite correct about the "Mozambique Current" not existing as a strong western boundary current as it is still represented in school textbooks (and old oceanography ones too!). Since around about 2002/2003, more and more evidence has been mounting that the current flow in the Mozambique Channel actually consists of a series of anticyclonic eddies, which give the illusion of a strong southward-flowing current along the Mozambique coastline. At some stage, these eddies merge with the Agulhas Current, which flows down South Africa's east coast. It appears that when these eddies join the Agulhas Current, they cause events known as Agulhas Pulses and may also be responsible for the shedding of Aghulas Rings, which take warm, salty water up as far as the North Atlantic, and may influence climate and weather globally. In addition to remotely sensed data of sea surface temperature, mesoscale satellite altimetry and ocean colour, a series of moorings, known as LOCO, have been extremely important in learning more about these eddies and the flow in the channel. Satellite drifters (see picture to left) have also been instrumental in providing very obvious data on just how circuitous the flow in the channel can be. One of Algoa's objectives on this cruise, together with partners from the Royal Netherlands Institute for Sea Research (NIOZ) in the Netherlands, is to service this array and extend it out from the south east corner of Madagascar. If you're interested in the region's oceanography, Professor Lutjeharms wrote us a very comprehensive overview of it for the ASCLME website when the Project began. We're learning more and more about this surprisingly dynamic part of the world's oceans, and its vital role in the global weather and climate is increasing the amount of interest (and important international research partnerships) in the region.

Coelacanths are indeed found near Sodwana Bay near the South Africa's border with Mozambique. This discovery by a group of SCUBA divers spurred the creation of Phase I of the African Coelacanth Ecosystem Programme (ACEP) and then Phase II of the Programme, who are important partners of the ASCLME Project.