We sailed into Mossel Bay this morning around 8am, and quickly swapped the students from Indwe Secondary School with a group of younger students from several schools around George.

We're currently about to sail past the Knysna Heads here. 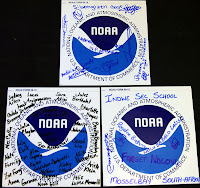 After breakfast this morning, most of the Indwe Secondary School students were feeling a little better, so I took a drifter (70969) out of storage and very quickly explained how it works - time was pressed as they had to get off shortly thereafter. The students applied the NOAA stickers they had earlier signed, together with one from Bradley Elementary School in the USA.

We had thought about actually deploying the drifter on this leg, but we stayed fairly close inshore on our leg to Mossel Bay, never much more than 15 Nautical Miles from land; the Captain and the scientists I spoke to thoughtt the drifter was most likely to wash up ashore within a few days that close to land, which wouldn't be a very exciting deployment for the students to follow! My colleague, Tommy Bornman, will ensure that the 5 drifters we put aboard are deployed in the Mozambique Channel as they cross towards Madagascar, or along the southern coast of Madagascar. The drifter may end up entrained in one of the Mozambique Channel eddies, and that will certainly be interesting to follow!

The new group of students and I spent most of the morning on the foredeck in glorious sunshine, with the students and teachers asking me questions about all sorts of aspects of ocean science and life in the sea and on board boats, ranging from how does a boat float, to what happens to the oil in a ship if it sinks or catches fire, the effects of the Horizon Deep oil spill and we even covered some genetics, life history strategies (including a brief foray into the world of intra-uterine cannibalism, as seen in a fairly common shark species (the ragged tooth or sandtiger shark) and evolutionary biology!

In a short while, we'll see who feels up to touring the bridge; we're promised some rough weather a bit later, with a 30 knot wind, which will definitely give us a bit of a wild ride until we reach the shelter of Algoa Bay, which will be around 3am this morning; we'll start docking procedures into Port Elizabeth around 7am.

(This post was written several hours ago - I've been waiting for a cellphone signal before being able to post it!).