All scientists regularly use all sorts of acronyms and jargon in their work and we sometimes assume everyone knows what they mean. Some of the acronyms don't mean all that much when spelt out in full either! I thought it would be a good idea to intersperse this cruise blog with "Jargon Buster" posts, which I hope will explain and illustrate some of these concepts. First up: Satellite Drifters!

We've been talking about satellite drifters for several days now. So what are these things anyway?

Essentially, satellite drifters are oceanographic ("ocean studying") instruments that give us a good idea of how surface currents in the oceans move over long periods of time.To the left, you'll see a diagram of roughly what a drifter looks like, courtesy of NOAA's Adopt a Drifter Program (if you want a closer look, click on it!).


What does it do?
In addition to letting us know how ocean currents move (see the "Where is it now?" section  below for information on how that works), all the drifters we deploy carry a sea surface temperature (SST) sensor, which measures the temperature of the water under the surface. Some of the drifters can also measure barometric (air) pressure, wind speed and direction, salinity and even ocean colour.


What's the design all about? 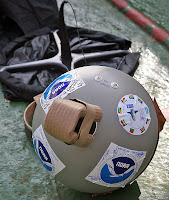 In the diagram above, you will have noticed a tube sticking out of the top of the buoy, then the buoy float itself; this tube is connected up to a barometer that measures air pressure (there was a time I though this was an antenna, but that's inside the main drifter buoy). If you're wondering why they're two-tone, the reddish part is actually anti-fouling paint to try and stop things like barnacles and seaweed from growing on the buoy, which may affect its accuracy (affect its drag), and if it gets bad enough, sink it! On the upper part of the buoy you can often see two stainless steel screws protruding (take a look at the image to the right); I once wondered if they were for checking battery charge, but they're actually submergence sensors that let the system know the drogue is still attached; other models have a strain sensor in the wire rope attachment under the float that performs the same function.

Below the float is a length of plastic-coated wire rope, which connects up the the blue section. The blue section with the holes in it is what we call a "holey sock drogue". The holey sock drogue is there to basically "anchor" the drifter into the water column; if the drifter just consisted of the buoy alone, it would mainly be influenced by the wind or surface wind-driven currents; we're much more interested in knowing what is happening with the water in the upper ocean as a whole, rather than where the wind is blowing! The horizontal lines you see on the drogue are essentially hula-hoops that hold the drogue's cylindrical shape open; the bottom one is weighted to make it sink, and the top one is often slightly buoyant to help the drogue stay upright in the water column. The holes act a bit like the dimples on a golf ball (they affect its drag and how it moves through the water) - essentially, they're there to "disrupt the formation of organised lee vortices". Huh? Picture a rock in a stream (or a bridge piling) and the mini whirlpools that form behind it; those little whirlpools are lee vortices, and in the case of a buoy (which isn't fixed in place like the bridge or rock) affect the drag (how easily the object can move through the water) - and affect the accuracy with which the buoy tracks the actual flow of ocean currents. The middle of this drogue is at about 15m below the surface of the water, so these instruments are pretty long!

New drifters have several biodegradable (I've often noticed that one of the first questions enquiring young minds in South Africa make about deployed oceanographic instruments concerns any pollution they may add to the oceans!) paper fixings that make them easier to handle; bands around the drogue make it easier and neater to deploy from the ship; a cardboard ring stops the wire rope from tangling and a small magnet paper taped on falls off once the buoy is in the water; this magnet activates a relay inside the buoy and is essentially an on/off switch that saves the battery power until the drifter is active.We remove the outer plastic wrap and the bulkier bits of cardboard and dispose of those back on land.

Inside the buoy you'd find some battery packs consisting of "D" cells, a radio transmitter and a some electronics that take care of the sea surface temperature measurements, monitor the submergence or tether strain sensor and translate this information into numeric data and beam this back through the ARGOS network to a data centre along with the drifter's unique ID number. I've often wanted to crack one open and take pictures of the innards, but I can't justify "wasting" a useful piece of scientific equipment like that. Hopefully, one day I'll get hold of an old one to "cross section", or we'll persuade the manufacturers to send us pictures of the innards!

Where is it now?

Not using GPS has two benefits; 1) it makes the drifters simpler and therefore cheaper and 2) it takes less battery power so the drifter can be smaller or use less batteries - or last longer for a given battery pack. Depending on the quality of the fix obtained, this non-GPS position finding can be accurate to within about 150m to 1,000m - more than accurate enough to track ocean currents.

If you're not familiar with Doppler shift, think about the last time a police car, fire truck or ambulance drove past you; you may have noticed that the apparent pitch ("tone" or "note") of the sound went up as it came towards you, and then rapidly went down as it went away from you. Even a car's exhaust sound will show this effect (neeeeeeeiiiiiyeeeeeeuuuuurrrr!). This also happens with electromagnetic radiation like light and radio waves; the "red shift" of stars observed by astronomers suggests the universe is expanding (the stars are travelling away from each other and their light "shifts" to a redder [longer wavelength] spectrum; if a star was coming closer to you, its spectrum would shift towards the blue [shorter wavelength]) - and in the case of the drifters, the apparent frequency of the radio signal increases and then decreases as the satellite moves towards the drifter and past it. Coupled with some nifty maths and (well founded) assumptions about the shape of the earth, you can quite accurately work out the transmitter's position; depending on how confident the system is about the quality of the position data, it will be tagged to let the data centre know how reliable the position fix is.

This Doppler Shift-based location calculation is nicely illustrated on their site here. Everything you could possibly want to know about ARGOS is covered in their extensive manual.


How much do they cost?
The basic Surface Velocity Program (SVP) drifter with Sea Surface Temperature probe are about US$1,500 for one. More complex models cost more, depending on what instruments they have on board, up to around US$3,000 or more for extra features.

Why?
Why do we deploy drifters anyway? And why do they measure sea surface temperature (SST)? Great questions!

First the drifters themselves. Being more or less "anchored" in position with the water mass they're tracking by their drogues, the drifters track the movement of ocean water below the surface without being overly influenced by wind. Over time, lots and lots of observed drifter "tracks" let us build up a detailed picture of how the oceans move, and we're beginning to better understand just how complex some of these currents can be (click on the picture of the drifter tracks further up the page for a closer look). And, unlike a research vessel, which can cost tens of thousands of dollars a day to keep at sea, a drifter will send us data for over a year for around $1,500 (more complex drifters are more expensive). Clearly, if we're going to understand much about the oceans at all, we need to understand how the water moves - so knowing the surface currents is an important first step. The global Surface Velocity Program aims to have at least one drifter in every 5ºx5º grid of the ocean - a global network of 1,250 drifters active at any time.

Secondly, SST. Sea Surface Temperature, if you haven't already worked it out, it the temperature of the seawater near the surface of the ocean. The buoy has a small thermistor (a temperature measuring device that works by measuring the [known] change in resistance of an electrical circuit due to temperature fluctuations) poking out from the underside of the float. This device accurately measures SST. We can also measure SST from space using remote sensing (a topic of a later Jargon Buster!), but this data needs calibration, and in situ ("on the ground" / "in place") temperature sensors like the drifters are invaluable for calculating the calibration and correction factors for satellite SST data; this process is sometimes also referred to as "ground truthing". Remote sensing also doesn't work very well when there is cloud cover, so it helps us "fill in the gaps" when there is heavy cloud obscuring our view of the ocean from space. Temperature is one of the most easily measured ocean water parameters, and with enough readings from all over the globe, gives us much useful information about how much and how quickly heat travels around the planet (vital in predicting weather and understanding climate).

If you'd like to see the kind of results you can get by combining a lot of drifter measurements like this, take a look at this illustration over at the Physical Oceanography Division of NOAA's Atlantic Oceanographic and Meteorological Laboratory.

If you're wondering where all the drifters are, here's a picture, again courtesy of NOAA:

Learn more
If you'd like to make any comments on any of the blog posts, you can do so with the links below each post, or feel free to contact me through the ASCLME website here.

Comments:
Is it also safe to conclude that the red dots indicate strong potential for oil and gas drilling in the deep sea? Most of the red dots already have those, particularly in the wide span of atlantic ocean close to the Brazilian waters. rigging inspection